Bunker Diplomacy: An Arab-American in the U.S. Foreign Service

Lebanese born U.S. diplomat Nabeel Khoury “offers readers a searing personal journey through America’s trials and tribulations in the Middle East,” writes former Deputy Secretary of State William Burns. The book, Bunker Diplomacy, is a firsthand account of U.S. diplomacy in the Middle East through the eyes of an Arab-American who tried to bridge the divide between Washington and the Arab world through interactions with Arab literati, journalists and government officials. The stories he tells of his experiences in Egypt, Saudi Arabia, Morocco, Iraq and Yemen shed light on why U.S. diplomacy moved over his twenty five years in the service from open-door cultural facilities throughout the region to hiding behind high walls and inside sealed safe havens.

Moroccan royal family member Hicham Alaoui writes, “This is a gripping narrative that fuses two stories in one - The personal journey of a man who stood between two worlds, Beirut and Washington, at once Arab and American, The second narrative is a story of America itself as a great power casting a long shadow over the Arab world … that these two stories come from the same book is reason enough to read it, but that they come from the career of the same individual will make readers never forget it.”

Former U.S. ambassador to Qatar and Lebanon writes, “ From Egypt, to ‘The Magic Kingdom’ to Iraq, Morocco and Yemen — Dr. Khoury undertook his duties with a flair that was both bold and unique. I only wish that American policy makers would read his chapters on Morocco and Yemen in particular, and benefit from his general policy recommendations.” 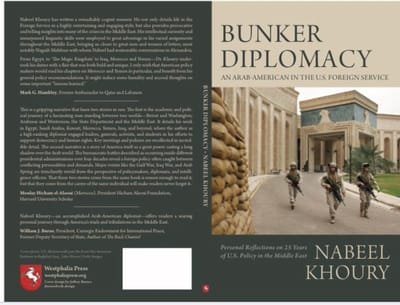